Evolution, It’s Not Just For Dogs With Gas

Some of you may recall I mentioned our family dog Pepper and his digestive issues in an earlier post. Poor Pepper. As a puppy he was sick all the time until the vet determined he was born without the ability to properly digest his food. We had no choice but to put him on a bland dietetic dog food regimen something akin to eating cream of wheat all day every day throughout his lifetime. This ailment forced Pepper-the-newborn to spend a lot of time indoors growing quite accustomed to his diminutive owners. The David’s as a general rule, are low to the ground. I’m not sure any one in my immediate family has made it to six feet tall.

Sheltered by a family of Hobbits, Pepper had difficulty dealing with those of normal stature. I distinctly recall my sister had a friend named Jenny. A very tall, boisterous girl who scared the fleas right off of Pepper. (I’m sure my mother would want me to stop and reassure you the dog never had fleas, but for purposes of this story let’s assume he did.) A typical scene at the David compound, enter Jenny, teenager-of-loudness, Pepper goes apoplectic as he runs backwards, yes backwards, barking at the top of his lungs, and stopping to hide behind every large piece of furniture available. His own exceedingly noisy neighborhood un-watch if you will, involving a sofa, a piano, and a coffee table.

The proof that Pepper was raised Jewish (or possibly Italian now that I think of it) is that the only way to get him to stop barking was to sit the tall offender down in the kitchen and feed him or her. At this point you could practically hear Pepper’s old Jewish man voice say something like, “Oh, you brought someone over to have a nosh? I see. I was unaware we were having guests. You might have mentioned it earlier. If anyone needs me, I’ll be in my spot on the stairs. But be warned, I’m feeling a bit gassy today. Proceed with caution.”

Here is a photo of Pepper. I call this one Flatulent Dog with Tulips.

The blandness of Pepper’s diet also made him something of a rapscallion where food was concerned. He once leaped up on a kitchen table just to get his greedy paws on some broiled chicken, also tore through a suitcase, shoebox & plastic bag in order to gnaw on a stale oatmeal cookie that arrived home with me from summer camp; and I’m fairly certain he’d have killed someone just to get his lips around a Trisket. In fact, the only food Pepper didn’t care for was raisins. I discovered this one day when I accidentally dropped one on the carpet and he leaped on it with enthusiasm.  For a few seconds Pepper rolled the thing around on his tongue, like a sommelier with a fine vintage, then promptly spat it out at my feet and looked up at me accusingly.  You haven’t really lived till you’ve seen a terrier spit raisins at you. 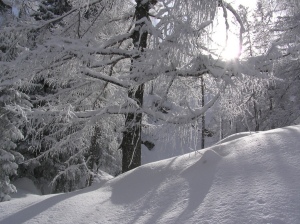 What’s got me to thinking about Pepper and his sheltered world is the recent blizzard here on the East coast. Twenty inches dumped on NYC. Reminded me of the kinds of storms we had when I was a kid. A thick creamy blanket of white covered the backyard, every tiny tree branch and twig glistened, encrusted in ice. What an extraordinary transformation occurs in our surroundings after a snow storm. And there was little Pepper safely ensconced in his suburban digs, eating his bland food, living his bland life, watching the view through the window metamorphose into a world fit for the Narnia Chronicles.

The morning after one of these infamous storms of my youth, Pepper suddenly went

missing. A door accidentally left open and the little fellow was nowhere to be found. We shouted, we screamed, we trudged up and down the frigid block, where-oh-where had that damn dog gone? We all stood about the kitchen, dejected. Suddenly, I spied movement in the vast expanse of white coating the backyard. Every few seconds a tiny black ball of fluff would fly up into the air, like Tigger hopped up on Malt Extract, appearing then disappearing into the deep mound of snow below. “Oh my god,” my mother exclaimed, “it’s Pepper!” Curiosity had gotten the better of my stinky pal so he’d ventured forth into the great unknown. Although the snow was too high for him, he made valiant attempts to conquer it, and had the time of his life in the process. My father dutifully retrieved the dog, the kind of thing dads do, after all. We showered Pepper with attention and dry towels, while he mulled over the memory of this exciting moment in his ordinary humdrum life.

It’s that damn time of year again, isn’t it? New Year’s. Everyone’s supposed to be grateful for what’s been, counting their blessings, looking forward to the future, revelry, resolutions, and all that crap. I must admit there’s nothing I dislike more than the undoubtedly self-imposed pressure this end-of-year accounting brings.

The topic during the weekly #Writechat on twitter this weekend was What did you accomplish this year? This is the response I tweeted: “2010, the year I finished my novel, got an agent, started my blog & discovered a whole world of writers on twitter. Not bad for one year.” The #writechat community were enthusiastic and encouraging about my details. For a few minutes I was even able to see myself through their eyes. It sounds good, doesn’t it? But as my new twitter pal Sandi (@Devacoach) speaks about on her blog, my “lizard brain” chooses to show me all the spaces in-between those words, where I have yet to accomplish so many things. This vigilant self protective part tries to prepare me for the unknown by stopping me from taking risks or getting overly excited about what has already occurred. The lizard has been impeding my progress for quite some time now, and I aim to do something about it.

Like little Pepper, my world is small and often quite bland. I want, well…more. I’ve contracted for far too long, despite my many fears, it’s time for expansion. I wish to explore, to leap into this frothy expanse like that raisin-hating terrier, and evolve. There may be bumpy, frigid terrain ahead, snow may rise in tall mounds around me, but I don’t want to give up. I want my world to grow.

So here it is, I start this evolution today with the most basic of declarations. I think I have

to own it, this writing thing. Stop crying impostor and chastising myself. (Something I’ve been doing an awful lot of lately.) I don’t know how to mix a martini, don’t know how to ride a bicycle, never been able to keep a house plant alive, but I am sure of one thing, I am a really good writer. This is not arrogance, and if you knew me personally you’d realize what a huge event it is for me to take possession of this label. It’s not a presumption that there’s nothing for me to learn either for there are millions of things I’ve yet to understand. But the stillness in my life comes when I am writing. I am strong when I capture words on a page. I know how to evoke feelings with language, the most satisfying power I’ve ever experienced. I have no idea if my book will sell, I have no idea if the 17000 words I’ve written of the next book is worth pursuing, I have no idea how to make money writing, I have no idea where my next dollar is coming from, be that as it may, I am a really good writer. So bring it on 2011, I’ve got my snow shoes and my ski parka and I plan to do some exploring.

Heidi David is a writer and freelance producer. She is the author of an as yet unpublished novel, THE FLYING JEWEL; the tale of a traveling circus where the price of admission is one's free will.
View all posts by Madame Paradox →
This entry was posted in Uncategorized and tagged agent, Blizzard, blogging, bravery, childhood memory, dog food, dogs, end of year, evolution, fear, gas, Humor, New Year, New York City, novel, old jewish man, puppy, raisins, scottish terrier, Snow, Tigger, writer, writing. Bookmark the permalink.

27 Responses to Evolution, It’s Not Just For Dogs With Gas