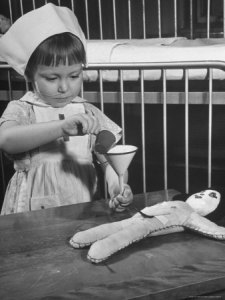 After I posted my Writer Whacked In Effigy piece, Diane Verenberg from I’ll Cut You sent me a funny link to a childhood memory of hers about a harshly judged stuffed animal, and it got me to thinking about my Tanda bear. Tanda, may he rest in peace, was a small stuffed koala, a gift for young Heidi from a trip to Australia.  For some reason my inability to understand the difference between a panda and a koala as well as my already fully formed geographical ineptitude resulted in the name Tanda. Panda minus the P take a right at Papua New Guinea, or something like that.

Unfortunately our dog, Pepper–whose digestive difficulties and fondness for roast chicken were legendary–got a hold of Tanda one day, scratched away some of his fur and quite literally gnawed the little koala’s butt off.  I refused to part with Tanda and spent the better part of my early childhood wandering around clutching a partially bald koala swaddled in masking tape in order to keep his guts from falling out his derriere.  A lifelong inability to throw anything away has followed.  Cocktail napkins, movie stubs, playbills, I might need them later.  I wouldn’t say I’m one of those hoarders, exactly.  Let’s just say I retain water and change with equal aplomb.  (If you think I’m kidding, just ask the bank where I dumped over a thousand dollars in coins this summer after cleaning out my closet.) 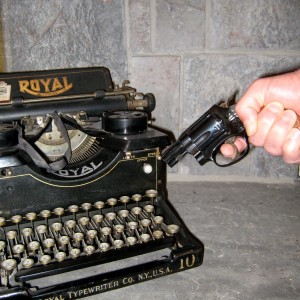 This unwillingness to let go brings me to yet another writing analogy, this time about the editing process. There’s this famous fellow (apple-cheeked author seeks audience for animated alliteration) Sir Arthur Quiller-Couch is his name, I looked it up.  He’s the one who advised writers to “Murder your darlings.” His classic advice to cut your favorites because writers are never objective about their own work.  I know there are times when I want to sink my teeth into a lovely phrase and not let go.  But I also find the reverse is true.  If I’ve read and reread something I’ve written the words no longer have meaning for me, and I’m apt to destroy things that actually belonged in the first place.  So what do you think?  Are we ever capable of stepping back from the work we’ve done and judging it objectively?

Postscript:  Wordpress has this feature where they recommend content based on your post.  Apparently my mention of the word koala brought up the suggestion below. It was so amusing to me that I’m leaving it in.  I think we all know who is the bigger slut, don’t we?

Heidi David is a writer and freelance producer. She is the author of an as yet unpublished novel, THE FLYING JEWEL; the tale of a traveling circus where the price of admission is one's free will.
View all posts by Madame Paradox →
This entry was posted in Uncategorized and tagged childhood, editing, Humor, koala, murder your darlings, Sir Arthur Quiller-Couch, stuffed animal, writer, writing. Bookmark the permalink.