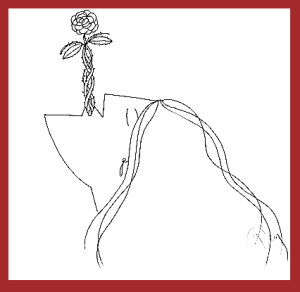 At sixteen, Sarine Cork–a girl with the peculiar ability to smell lies–arrives at a stopover for traveling acts in search of answers about her mother.  Years later she stands on stage, an otherworldly seer who swallows down thorn-covered rose stems but does not bleed.

At least that’s what it says on the bill.

When a crimson rose appears overnight in her mother’s withered garden, Sarine is propelled on a life-altering journey to uncover the truth about the woman who abandoned her as a child.  The ringmaster Big Al holds the secret to her mother’s past, but only initiates to his show are permitted to ask questions.  Head shaved, the show’s insignia branded beneath her thumbnail, Sarine’s indoctrination begins.

Ten years later now a headliner, her patrons hunger to see their neighbors’ sins exposed through Sarine’s psychic visions.  But night after night the act slowly destroys her.  God wills Sarine to perform this role, or so the ringmaster would have her believe.  A cast of players including Charmé, a snake charmer with a forked tongue and a tortured past, hides secrets that may help unravel Big Al’s lies.  But to discover the show’s connection to her mother–and, more important, to survive–Sarine must find a way to resist the ringmaster whose sway over her borders on dangerous obsession.

5 Responses to THE FLYING JEWEL