Dr. Freud, We Have A Problem 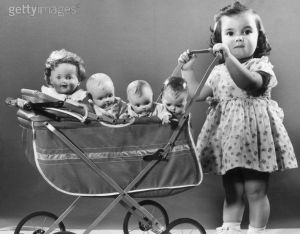 There are few things that warm the cockles more than watching a young child play with her dollies.

Unless of course she’s me.

A dolly placed in my hot little hands was immediately stripped of her worldly possessions. That’s right, you read correctly, I removed her clothing. I can’t tell you exactly why I insisted on carrying around a pack of bare assed dolls in my stroller. Perhaps, even in my youth, I had little patience for bullshit. Wanting instead to delve beneath the surface and find out what made those plastic wonders tick.

But the dysfunction didn’t end with toy nudity. Oh no. Young Heidi was also obsessed with making her dolls…

Yes, next to Jamoca Almond Fudge ice cream, I believed a peeing doll was one of the 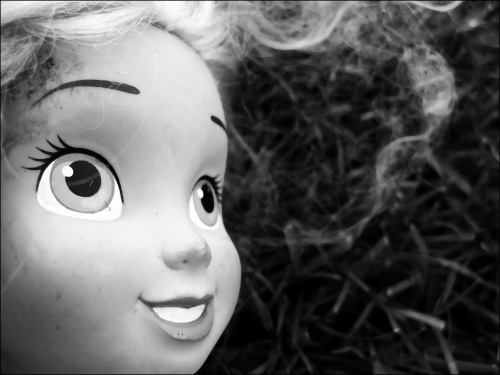 lord’s greatest creations. And if the doll in question was not originally designed for such activities, I found a way to create an opening in its mouth. At which point I’d dutifully give the little sack of sunshine her bottle and then wait patiently for the big event.

I’m sure my mother loved discovering these water-filled mold receptacles. Have I also mentioned I cut their hair, drew on them with marker, and removed their limbs? All the while assuming my inanimate friends would return to normal of their own accord the very next day. Time after time I was baffled. Why can’t I make them do these things? 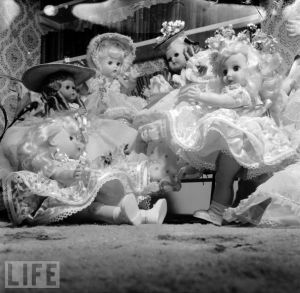 That stubborn determination to force my congregation-by-Mattel to do what I wanted brings to mind a recent editorial experience.

A few weeks ago I posted a short story Edwina, Pretty Edwina. I’m thrilled to see it was one of my most popular posts because I liked the piece very much. (In fact the only post that’s had more hits than that was I Don’t Eat Spotted Dick, But I Could Try, and I’m guessing that’s just because you all have very dirty minds.)

The photo of the four-legged woman was incredible inspiration of course. Almost immediately I saw her sitting in the window of a shoe store. So the beginning was clear. I even heard the first paragraph as if it was a melody playing in my head. And I knew how I wanted it to end. But the million-dollar question was how to get Edwina from A to Z effectively? I developed my antagonist’s many peccadillos, added then subtracting other characters when I realized they didn’t strengthen the story. A little research about tanning leather and the history of cobblers added yet another layer. I wrote several drafts before I worked it all out. But with each version I got closer and yet further away from my goal.

Something didn’t work. Wracked with frustration, I could not find just the right way to

get from the story’s climax to its resolution. I tried to force a solution by reading the different drafts aloud over and over until I could no longer recognize them as English. In my attempts to make it work, I lost the rhythm of the words altogether.  Finally, I threw up my hands disgusted, fearing I would never find the right level of aggression and subtlety. A better writer could figure this out, but not I.

Then I did what I should have done all along and left it alone for a few days. I hate the time-to-leave-it-alone part of the editing process. I think I’m still under the impression if one dolly won’t pee when I give her a bottle maybe the next one will, and why the hell hasn’t Barbie’s hair grown back, dammit? 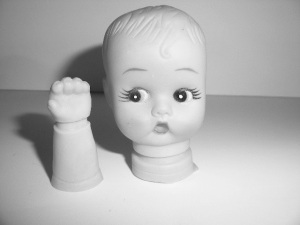 I’m sorry, what were we talking about? Oh yes, the leave-it-alone-and-don’t-force-it part. I suppose like so many things in any creative process it is fear that drives my inability to step back for a time. Perhaps a lack of confidence in my ability to work it all out if I return later? But I think all creative endeavors require breathing room. Don’t you?

Incidentally, several days later as my lids fluttered open to greet the day, my mind suddenly produced the few sentences of dialogue that brought the pieces together. They 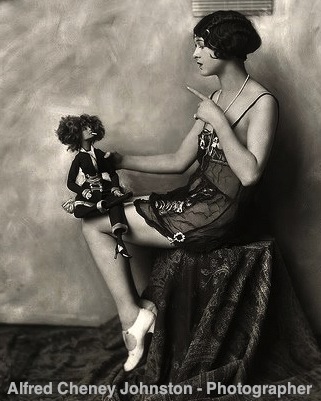 didn’t show up though until I stopped trying to make them appear and gave the tale some time to cook in my head.

You see we must all heed the lesson of the non-peeing dolly. Sometimes no matter how hard you force her, Chatty Cathy cannot be turned into Baby Alive. But if you wait patiently you might receive Velvet for Hanukkah whose hair grows longer and shorter with the twist of a knob. However, she will still look unattractive if you drag her around the playground in the buff. And while this may be the weakest of metaphors, and in all likelihood my penchant for naked dolls was merely a sign of exhibitionist tendencies to come, I still felt the topic of giving your creative endeavors time to breathe was worth mentioning.

Postscript: In this last paragraph I’ve given you links to some truly silly vintage doll commercials. But for extra super duper dolly creepitude let me recommend this spot for Baby-laugh-a-lot. What were these ad execs thinking when they came up with this one?

Heidi David is a writer and freelance producer. She is the author of an as yet unpublished novel, THE FLYING JEWEL; the tale of a traveling circus where the price of admission is one's free will.
View all posts by Madame Paradox →
This entry was posted in Uncategorized and tagged 1960's doll commercial, 1970's doll commercials, advice, Baby Alive, Baby Laugh A Lot, Barbie, Chatty Cathy, childhood memory, creative process, doll, editing, Freud, funny, Humor, Mattel, naked dolls, strange childhood behavior, toys, Velvet, writer, writing. Bookmark the permalink.

20 Responses to Dr. Freud, We Have A Problem