A dark and creepy tale inspired by a rather unusual photo. 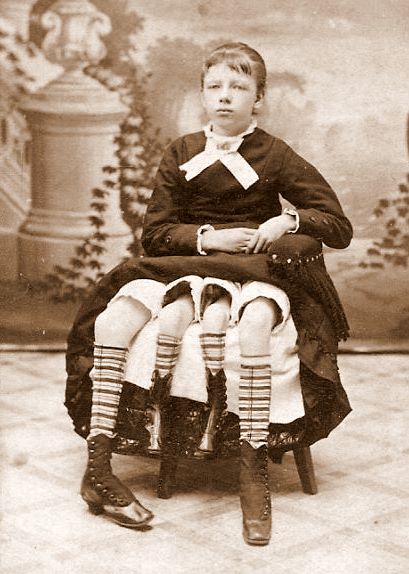 Edwina, pretty Edwina sits in the window. See her shoes, those shiny shoes, the finely tanned leather, and the smart buckles? A fine custom shoe the cobbler sells, yes indeed, at very reasonable prices. It was his son’s idea to place sweet Edwina in the window, and the people flocked, lord knows they flocked to see the young woman model his wares.

Everyone in town knew about the girl. The sad story of her mother’s death during childbirth, the shock that overtook her father when the midwife first placed the strange infant in his arms. He’d studied her four legs, the two that appeared to work and the two that merely dangled. “Is it babe or beast?” he’d asked. He hadn’t started out a cruel man though, just ill equipped to cope with such a portent. He tried, but with no wife and all those legs, it wore him down, his health suffered.

Edwina did the cobbler’s inventory once a week. That is until his son Barley suggested she go in the window. At first, the cobbler insisted it was wrong to capitalize on someone’s weakness like that, unchristian. But the boy claimed she was more than willing to help. Of course she was willing, it was Barley you see who had asked her. Barley who had blood in his smile and smelled vaguely of spearmint. Barley, whose reputation was that of a scoundrel. But none of that gossip mattered to Edwina.

Both the curious and the credible filed past her window. Some with noses pressed against the glass.

“See the tiny feet ma? Small, like my dolly?” a child said, pointing.

“Made in the devil’s image,” her mother said, shaking her head.

Edwina had a philosophy, even when people were vile it was best to be kind and docile. Of course their words hurt her, but the extra wages went to pay for father’s medicine. For some reason the barkeep was the only person in town who knew how to make it up special. If Edwina didn’t bring father his medicine at least three times a week he grew enraged, shaking and trembling violently.

The cobbler’s son stood in the shop doorway talking up the passersby. “See the fine stitching on those boots, folks? All options available from the daintiest arch to the ugliest hoof. And, as you can see, both are featured here.” Barley’s eyes glittered in the sunlight. With pomade in his hair and those shiny brass buttons running down his suit jacket, everything about him gleamed.

“A shame she ain’t got four titties too,” a man said, nudging his buddy in the ribs.

The cobbler’s son knew things, like how many steps one had to climb to reach the top of the tower of Pisa, or that Wiggins made the best brand of hair tonic. Barley was going places, far off lands, where he would make his mark on the world. He was meant for more than just some foolish little cobble shop. At least that’s what he told Edwina.

Barley convinced his father to begin making customs. Cobblers made repairs mostly, not special order boots from scratch. But the boy promised he’d study up and do the work himself. As it turned out, Barley found the smelly shoemaking process most unpleasant. Instead, Edwina took on the more arduous tasks, learning to salt and soak the hides in oak bark, studying the ornamental stitch patterns, trimming then burnishing the soles. She enjoyed every aspect of creating a fine pair of shoes. Tending to her father’s ailing health had left little time for education. And Edwina was not, as they say, the marrying kind. Perhaps if he saw she was useful for something in this world, her father would finally be happy.

Edwina didn’t mind tanning hides for Barley while he went off to other important business. He was going places after all. Barley courted a lot of girls, but Edwina was his special gal. That’s what he’d said, that one time. The cobbler showered his son with praise for the fine leather. He even gave him a extra nickel for his efforts. Barley said he’d keep the nickel for her and put it to a worthy cause. Few people in the community seemed aware of his generosity. Barley also said he’d tell the cobbler about the work she’d done someday, just as soon as the custom business took off.

Other boys turned away or snickered when they saw her coming. But not Barley, he kept his eyes pinned. Once, when a shoe slipped off one of the castaways, (that was what her father called Edwina’s extra limbs) Barley kneeled down and slipped it back on for her. He grasped hold of her tiny ankle, grazing the soft pad of his thumb against her shin over and over until she thought he might wear the flesh away.

Another time, while Edwina polished a boot, Barley suddenly came up very close to her. Closer than he’d ever been before. “That’s a fetching ribbon in your hair,” he said, adjusting his belt buckle.

Two hot spots glowed on her cheeks as Edwina fondled the satin. “I couldn’t decide on the blue or the green, “she said.

“The blue suits you,” Barley said, his eyes cascading down the length of her dress. “I should like to see it tied round your lovely little ankles.”

“Barley, you are silly,” Edwina said, giggling. He had such a sophisticated sense of humor.

With Edwina in the window featuring the cobbler’s finest and her shoemaking efforts behind the scene, customers began calling with regularity. The cobbler took to humming. Barley bought himself a new traveling suit.

One afternoon the boy offered to help her with a pair of grey ladies patent leather lace ups. Barley lifted her tiny limbs letting them rest upon his upper thigh. As he slipped the shoe onto her foot, his face grew red. His eyes suddenly glazed as Barley dug his strong fingers into her thin calf.

“My leg. You were holding it a bit tight.”

“My apologies,” he said, perspiration glistening on his upper lip.

“Will you help me close up shop tonight, Edwina? I hate to do it alone. Could your pa spare you for a time? I won’t take long,” Barley said, licking his lips.

The latch turned in the door with a loud click, locking them inside. He said he wanted to understand her unusual anatomy. Just how did all four legs fit under her petticoat? He meant no disrespect, he said. Couldn’t she show him? It would be their little secret. She was his special gal, after all.

Edwina had never seen a boy inflamed before. It was not at all what she’d expected; the biting, the scratching, pinned to the shoe forms, his hands round her throat, and it turned out his lips didn’t taste like pomegranates at all.

When he was finished, Edwina noticed a fresh scuff on her patent leathers. Barley stood at the mirror adding Wiggins to his already slick head of hair. Although she knew her father’s medicine was just the whiskey rotting out his liver, and no matter how hard she worked she would always be more beast than babe to him, Edwina had tried over the years to be kind and docile.

She rubbed the damaged leather with her thumb.

“From now on you will meet me here once a week, sweet Edwina,” Barley said, belting his trousers while admiring his own reflection. “Otherwise, I shall have to convince my father you’ve been stealing from us.” He pulled open the cash register drawer and pocketed several bills. “You wouldn’t want that, now would you?”

Edwina stared at the vat of tanning acid in the back of the shop.

Not every circumstance called for kind and docile.

Several weeks later the cobbler held a gleaming pair of off white opera slippers up to the light. “These are exquisite, Edwina,” he said running his finger over the tiny stitching. I’m sure all the ladies in town will want a pair.”

The cobbler glanced out the window. Where had that impossible boy gone? He’d threatened to leave before, but Barley rarely followed through with such things. And now, just as business was finally taking off, he was nowhere to be found.

“Well dear,” the cobbler said, “I couldn’t be more pleased with your work. Tell me, how did you get the leather so soft and smooth?”

“Oh, it’s all in the raw materials, I suppose,” she said, smiling.

Edwina, pretty Edwina sits in the window. See her awl so very sharp, piercing holes in the leather? Forty stitches to an inch, some say. Such supple leather, no one has ever seen anything like it before. Her fine custom shoes the cobbler now sells, yes indeed, at very reasonable prices. Before his son ran off it was his idea to place Edwina in the window, and people flocked, lord knows they flocked, to see the woman model her wares.

The real story of  Myrtle Corbin (the woman pictured above) is quite incredible. Click here if you’d like to read about it.

MR. WHATSHISNAME AND THE OLD BIDDIES

Heidi David is a writer and freelance producer. She is the author of an as yet unpublished novel, THE FLYING JEWEL; the tale of a traveling circus where the price of admission is one's free will.
View all posts by Madame Paradox →
This entry was posted in Uncategorized and tagged cobbler, Fiction, Four legged woman, Horror, Myrtle Corbin, revenge, shoemaking, shoes, sideshow freak, tanning leather, writer, writing prompt. Bookmark the permalink.