How To Win Friends And Influence People

New Year’s greetings, friends. I haven’t posted any fiction in a while. My twitter pal @ChrisGNguyen sent me a link to a flash fiction challenge using a photo prompt. (You know how much I love those photo prompts.) I must admit I wasn’t feeling inspired by this one, but then of course some weird bit of silliness began to take shape in my warped brain. So the photo below is courtesy of the blog Litstack; for the love of all things wordy. If you’d like to write your own piece, publish it to your blog and leave the link in the comments over at LitStack’s flash fiction challenge. Enjoy. 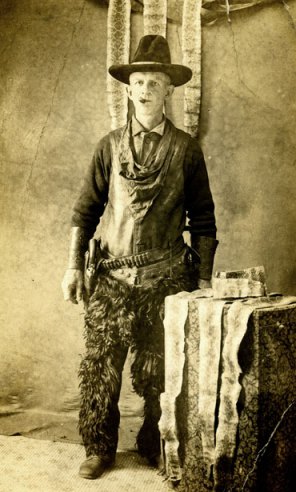 How To Win Friends And Influence People

It seemed like a good idea at the time. Open one of them old timey costume places so families could come in and play dress up. With authentic get-ups like cowboys, flappers, snake-handlers, gangsters, and his personal favorite, French maids, it was bound to be a big hit. But then some Buddhist fella decided to build a monastery down the road. Turns out the kinda tourists that go visit monks aren’t all that interested in flashback photos.

Stuff like this was always happening to Clyde. Like the carwash he’d opened during the freak rainstorms of ’51. There was that new fangled Radar-ray that could tell ya if your bones were broke while simultaneously roasting a chicken. He was still paying off the legal fees from that investment. Not to mention that damn sweater collective he’d sunk all his savings into. What the hell was an “alpaca blight” anyway?

Not much luck with the ladies, either. Last dinner out with Fanny things look to be progressing nicely. But man-oh-man, a guy tells one little off color joke about a greased pig and a peg-leg pirate and bam, out the door for Clyde without so much as a handshake. How was he supposed to know Fanny was missin’ a leg? Just as well, it woulda been nothing but southern belle costumes for Fanny.

“Happy trails to you Mr. Eric Sanderson, Mrs Lillian Sanderson and er, little peanut Sanderson,” Clyde said to the only customers he’d had all day. Crap, he forgot the kid’s name. He had a book about salesmanship that said it was very important to always repeat the customers names. As the family departed, he couldn’t help but notice little peanut scratching his scalp.

“Balls and biscuits,” Clyde whispered under his breath. Damn infestation was gettin’ out of hand. The old west saloon, the boudoir couch and the civil war set had all succumbed. From the looks of it the whole building needed a flea bath.

Clyde scratched his armpit and marveled at his bad luck. “Wait a minute,” he said, pulling out the special notepad he carried around for his eureka moments.

The guy’s name was Rod something, wasn’t it? Where did he put the card? “Aha!” Clyde said, pulling it from the junk drawer by the register.

Yeah, it was all coming back to him now. Rodolfo. Kinda pasty faced. Ran a company called Tom Thumb Ltd. He talked real fancy too. Said his specialty was the “inculcation of arthropods”. Clyde didn’t know what the heck he was talking about till he pulled out this palm-sized carnival complete with carousel, cyclists, and strongman booth. The whole thing was powered by, wouldn’t ya know it, fleas.

Genius. He’d make the deal with Rodolfo, maybe repurpose the old-fashioned beach backdrop, and when folks were done viewing the flea circus they could step up to the roaring twenties piano bar for some bathtub gin. He could see it now, Clyde’s Flea Circus-

No wait—Clyde’s Buddhist Flea Circus—yeah, those guys didn’t like killing stuff, maybe he could finally get some of their followers on board with this one.

As he hung a Victorian gentleman suit back on its hanger, Clyde hummed an enthusiastic tune. Things were lookin’ up. Maybe he’d even give Fanny one last call.

If you’d like to read more of my flash fiction check out the Bedtime Stories Tab.

Heidi David is a writer and freelance producer. She is the author of an as yet unpublished novel, THE FLYING JEWEL; the tale of a traveling circus where the price of admission is one's free will.
View all posts by Madame Paradox →
This entry was posted in Uncategorized and tagged comedy, Dale Carnegie, flash fiction, Flashback Photography, Flea Circus, Humor, LitStack, photo prompt. Bookmark the permalink.

17 Responses to How To Win Friends And Influence People