My Visit With The Amazon Warrior Women

Today, I will be guest posting for Debi over at The Truth About Motherhood. Now don’t all freak out at once. I am not with child. (Someone get my mother an oxygen tank, would you?)

In honor of her blog’s two-year anniversary, Debi is featuring some of her favorite writers, and I am honored to be one of them. Debi is a social media mom or, mommy blogger. If you are unfamiliar with these terms let me try to explain.

Thousands of years ago an Amazonian tribe of women came to prominence. They were known for their extraordinary feats of multitasking such as juggling screaming children while doing seven hours of hunting and gathering; after which they’d spend a relaxing evening hacking open coconuts with their machetes and whipping up Ngbotu-The-Warrior-God’s favorite meal while simultaneously getting kukui nut stains out of silk. Social media moms are the descendents of this extraordinary tribe. Only now, instead of slingshots and arrows, they are armed with laptops and mobile apps. The end result might best be described as the largest unrecognized union of blogging women across the globe.

Suffice it to say I’m nervous as hell to write anything for these powerhouse mamas (some of whom are men, incidentally). So if you’d be so kind as to click here and read my guest post, I’d really appreciate the support.

If you are stopping by from The Truth About Motherhood, welcome. For samples of my fiction take a look at my page of Bedtime Stories. Or, for some popular non-fiction posts, click the pictures below:

I DON'T EAT SPOTTED DICK BUT I COULD TRY 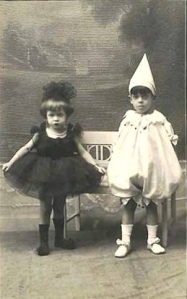 SENSITIVE SKIN, ONE REASON I'M NOT A PRIMA BALLERINA

Heidi David is a writer and freelance producer. She is the author of an as yet unpublished novel, THE FLYING JEWEL; the tale of a traveling circus where the price of admission is one's free will.
View all posts by Madame Paradox →
This entry was posted in Uncategorized and tagged Amazon Women, Bedtime stories, Fiction, Guest Post, Humor, I don't eat spotted dick but I could try, Mommy Bloggers, Sensitive Skin One Reason I'm Not a Prima Ballerina, Sheena Queen of the Jungle, Social Media Moms, The Truth About Motherhood, writer, writing. Bookmark the permalink.

12 Responses to My Visit With The Amazon Warrior Women